Theme by @mdo and @ralsina

This post is not edited. You may find horrible English mistakes.

Temperature gradient is the driving force behind the conductive heat transfer, and the gradient of chemical potential is the driving force behind the diffusive mass transfer. At low concentrations, the gradient of the chemical potential can be replaced by the concentration gradient. Here I'm going to show you how to solve a conservation equation when the only flux term is the diffusive heat or conductive mass (doesn't sound as funny as I expected). The equation reads

I think Dirichlet (constant value) and Neumann (constant flux) boundary conditions are quite clear in terms of their physical meaning. However, there are two important situations that lead to a Robin boundary condition. In heat transfer, when a boundary is gaining/losing heat to a medium with a constant temperature of $$ T_{\infty} $$ by convection mechanism with a heat transfer coefficient h (J/(m^2.K.s)), the energy balance equation at the boundary reads

which can be rearranged to the following form that can be formulated in the FVMtool:

For the mass transfer, if mass is produced or consumed at a boundary by a first order reaction rate, the equation reads

A (sort of) real problem

Fins are used to increase the heat transfer area and thus the rate of heat transfer. Here we are going to model a fin in 2D. The base of the rectangular fin is attached to a surface with a constant temperature of 100 degree Celsius. The fin is made of Aluminum, with a thermal conductivity of 237 W/(m.K), with a thickness of 0.1 cm and a length of 10 cm. The fin is exposed to a air at a constant temperature of 25 degree Celsius, and the heat transfer coefficient is 10 W/(m^2.K). This number may be off so you can estimate it using one of these correlations.
Let us jump into our Matlab FVTool, and solve this problem numerically using the finite volume method.

First, we start by defining the domain and creating the mesh structure:

Now, we define the the transfer coefficients. We assume that the thermal conductivity is constant on the whole domain. However, we need to assign this constant value to each individual cell. This is done by the function createCellVariable. After creating this thermal conductivity field, we have to calculate the average values on the interface between cells or the faces. Again, in this special case, the average values are equal to a constant. But in other cases when the conductivity varies with space, the averaging becomes more important. Three averaging techniques are available in the FVTool, viz. arithmetic, geometric, and harmonic. The output of these averaging functions is always a face variable. Let's see that in action:

a, b, and c must be defined in the program. Here, we have $a=\lambda/h$, $b=1$, and $c=T_{\infty}$. Don't forget to include the sign of the normal vector for the bottom boundary. The normal vector is in the opposite direction of the y axis and therefore its sign must be included in the temperature gradient term. I will talk about it in more details later.

Now, we have a domain with fully specified transfer coefficients and defined boundary. Next and final step is to find the matrix of coefficients for the conduction term and the boundary conditions, and solve the linear system of discretized linear equations:

Please find the source code for this tutorial here. To have some numerical fun, try to change the problem from 2D to 3D by activating the appropriate line in the Matlab source code. You can also increase the heat transfer coefficient and see its effect on the temperature profile. In the next post, I will explain how to convert this example to a unsteady-state simulation.
This is a snapshot of the 3D result: 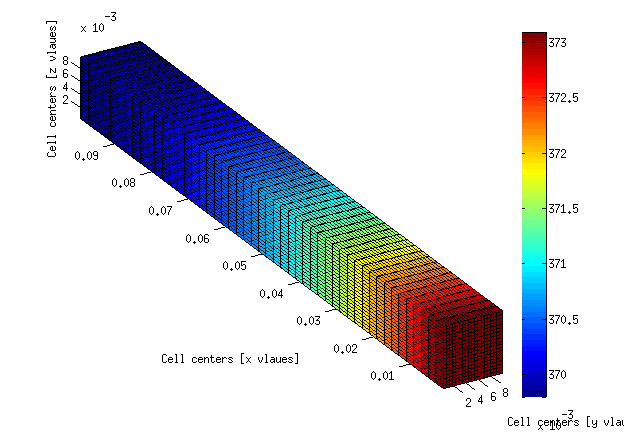