Theme by @mdo and @ralsina

There are many cases where the transfer coefficient in the convection-diffusion equations is a function of the independent variable. This makes the PDE nonlinear. While working on my thesis, I realized that it is not that difficult to use the Taylor expansion to linearize the nonlinear terms in a PDE. Here, I'm going to give a simple example. In another post, I will explain how the same idea can be used to numerically solve the Buckley-Leverett equation.

Here, I'll implement the procedure in JFVM. The same procedure can be done in FVtool.

The convection term that appears after linearization of the problem has a velocity term, which reads $$\mathbf{u}(\phi_0)=−2.0D_0\phi_0\nabla\phi_0$$ I have written a function, called gradientTerm which gives you the value of the gradient on the cell faces. This gradient is multiplied by a term that needs to be averaged on each cell face. Here, I have calculated the arithmetic average of $\phi_0$ using a function called suprise suprise linearMean. This is of course one way of doing it. The other ways are geometricMean, harmonicMean, upwindMean, tvdMean, and aritheticMean. Here, we will discuss them.

Averaging techniques for the face values in FVM¶ 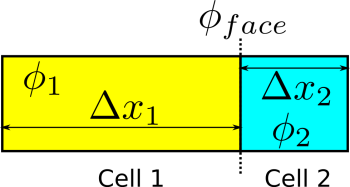 The averaging terms that are used in JFVM are as follows:

It reads $$\phi_{face}=\frac{\Delta x_1+\Delta x_2}{\Delta x_1/\phi_1+\Delta x_2/\phi_2}$$ Note that if the value of one of the cells is zero, the geometric and harmonic means are also equal to zero.
These methods have different applications for different ptoblems. We will discuss them in future posts.

The diffusion problem that we solved above can also be solved using a direct substitution method. Here, we don't use the derivatives and no linearization is required. The code is written here:

Show and compare the results¶

Here, I'm plotting the results of the Newton and the direct substitution methods for comparison.

The same problem implemented in Matlab: